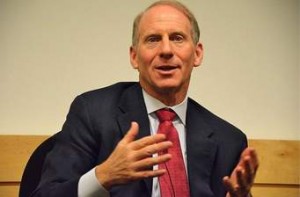 THE five main parties in the Stormont Executive have received a draft document on Monday morning on the way forward for Northern Ireland.

The document, which deals with parades, flags and the past, was presented to the parties by aides to US Diplomat Richard Haass.

Three of party leaders – Mike Nesbitt of the UUP, the SDLP’s Alasdair McDonnell and David Ford of the Alliance Party – are currently reading over the proposals.

While the leaders have their first chance to look over the document, Dr Haass is in London meeting Secretary of State Theresa Villiers and Downing Street officials to brief them on th document and possible progress.

Dr Haass, who has offered his services free of charge, will return to Belfast on Tuesday for another round of talks with local politicians in an effort to conclude his work before the Christmas holidays.

The politicial parties have each been given their own rooms to read the document away from prying eyes and incommunicado.

However, they have been banned from bringing in mobile phones and tablets into the room. The document will not be allowed to leave the room for fear of it being leaked to the media.