DUP: WE HAVE PROBLEMS WITH HAASS DOCUMENT 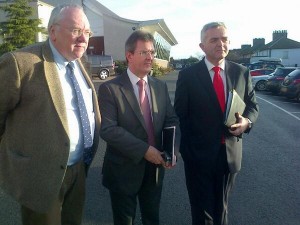 A SENIOR DUP negotiator at the Haass talks says certain areas of the draft document on the forward has presented his party with “significant problems”.

However, Lagan Valley MP Jeffrey Donaldson said other proposals in the document the party would like.

The five main parties in the Stormont Executive got their first chance on Monday morning to read the document prepared by the US Diplomat and his team of advisors.

However, the document was to remain in the rooms set aside for the parties at the Stormont Hotel.

And they were banned from bringing in mobile phones or tablets for fear it would be leaked to the media.

Mr Donaldson said: “There are some parts we like but other elements we will have significant problems with.

“It is by no means the end product.”

Unionist sources said the DUP had “frank and heated” exchanges last week with Dr Haass and his team over certain proposals.

As a result, said Mr Donaldson, there are “now very substantial changes to the document we were presented with then”.

He added the document presented on Monday morning now  “reflect concerns that we had”.

“That doesn’t mean they have all been dealt with satisfactorily,” he said.

A unionist source told Belfast Daily: “The main stumbling block for all unionists in the negotiating teams is the Union flag.

“The message has been pretty clear to Haass and his team: The Union flag is not for sale.

“We have made progress on the issue of parading and also with trying to deal with the past.

“But we cannot allow the Union flag to be bartered away.  That’s going to be the stumbling block for Mr Haass. ”

The SDLP later left the talks to brief party members.

Talks chairman Dr Haass was not present at the Stormont Hotel in east Belfast.

He is currently in London briefing Secretary of State Theresa Villiers and officials from No 10 Downing Street.

The diplomat, who has offered his services for free to try and move Northern Ireland forward, returns on Tuesday for almost two weeks of intense discussions with the parties.

He has said he hopes to reach agreement before Christmas.

But the issue of the Union flag could pose a serious difficulty in reaching agreement with unionists.