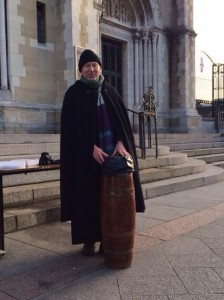 THE Dean of St Anne’s Cathedral in Belfast, John Mann, starts his annual sit-out in Belfast today in an effort to raise £200,000 for a range of charities.

The “Black Santa” tradition at Belfast Cathedral was started by Dean Sammy Crooks in 1976.

Dean Crooks was concerned at the emphasis being placed on necessary and costly building programmes at the Cathedral and decided to stand on Donegall Street in front of the Cathedral and beg for the poor and charitable causes.

With a small barrel in which donations could be placed, and dressed in the familiar black, Anglican clerical cloak, Dean Crooks “sat out” each day of the week before Christmas.

It was to be the start of a tradition of Belfast’s Deans sitting out for charities.

The local press described Dean Crooks as, Belfast’s Black Santa, and the description struck a lasting chord with the public.

Dean Crooks was succeeded by Dean Jack Shearer who involved members of the Cathedral Chapter in the Sit out.

Under his leadership the event continued to develop so that by his last Sit out in 2000, a total of £2.2 million pounds had been raised for charities over the previous 24 years.

Dean Houston McKelvey maintained this tradition throughout his ten years in office and the current Dean, John Mann has continued to do so.

The commencement of the sit out attracts considerable attention in the local press, radio and television.

The leaders of the four main Churches in Ireland, the Lord Mayor of Belfast and many other community leaders call at the Cathedral to greet the Dean…and to contribute!

All the money gathered is donated to local charities with a proportion given to Christian Aid.

The range of charities includes medical research; those caring for children, youth and the elderly; the improvement of employment opportunities for young people and a host of small charities which cannot afford paid fund-raisers.

Most of the money donated is given by people who come to the Cathedral during the Sit out.

Contributions are made by individuals, families, schools, offices and workplaces.

Some school choirs and bands come and perform on the cathedral steps during the Sit out.

To the fore amongst the schools are the students of Fleming Fulton School who all cope daily with physical disability.

Despite the problems with which they and their families cope with daily, they have an annual ‘Pennies from Heaven’ appeal for the Sit out for which they collect coins in Coke bottles.

They have raised thousands of pounds for the sit out in this way.

Some donors collect in the same way, all the year round, for the sit out by emptying their pockets and purses each day and placing pennies, tuppences, five and ten pence coins in tins, or jars or bottles which they bring to the Cathedral.

Many donors send a cheque by post to the Dean and a high percentage of these “Gift Aid” their donations, enabling them to be enhanced through the income tax being recovered.

Donations may be made at any time of the year, by sending a cheque made payable to “Cathedral Sit out” to the Dean, at Belfast Cathedral, Donegall Street, Belfast BT1 2HB