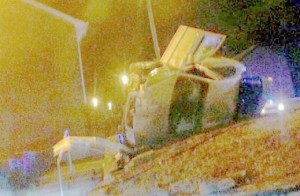 THREE police officers had a miraculous escape when the patrol car they were travelling in crashed in he early hours of this morning.

The car left the road and ended on its side at the “Bywash” on Derry’s Creggan Road. No other vehicle was involved in the crash.

Three officers were taken to hospital and released a short time later after being treated for minor injuries.

The “Bywash” section of Creggan Road was sealed off to allow police accident investigators to carry out a detailed examination of the scene.