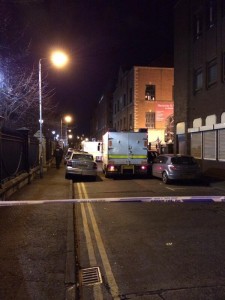 The holdall device contained a quantity of explosives and a cannister of petrol left at Belfast’s Exchange Street West on Friday night.

Army bomb squad officers who examined the bag told the PSNI that the device had fully detonated.

The PSNI said yesterday: “The device, which fully exploded, consisted of explosives and flammable liquid.

“It had been left on the street about 150 metres from the location identified in a warning call to a newspaper.”

Police have released a photograph of the Slazinger holdall which contained the bomb.

Chief Superintendent Alan McCrum said: “This was an attack on the people of Belfast going about their normal lives on a busy night for socialising in the city.

“This attack ruined the night out for these people.”

The bomb exploded while police were still clearing the area after a caller claimed the device had been left outside the nearby Ramada Encore Hotel.

Around 1,000 people attending Christmas parties had to flee bars and restaurants in the area of the Cathedral

Quater, a popular entertainment venue in the city.

Poliiticians say it was a “miracle” no one was killed or maimed.

First Minister Peter Robinson said the bomb was an “attack on democracy”.

“We are witnessing the work of a mindless minority who are intent on taking the heart out of the city and wreaking havoc on the lives and businesses of the people of Belfast and Northern Ireland,” he said.

“Their cause will not be progressed in any way by acts such as this and I would ask anyone with any scrap of information to pass it on to the PSNI without delay, to ensure that those responsible for these despicable acts are brought to justice.”

“Their actions have done nothing to move our society forward but, instead, have caused distress to local residents, disruption to Christmas revellers and loss of revenue for surrounding businesses,” he said.

Taoiseach Enda Kenny said it was “a mindless attack on the sanctity of human life, carried out by people whose depraved agenda cannot, and will not, be allowed to gain a foothold in Northern Ireland.”