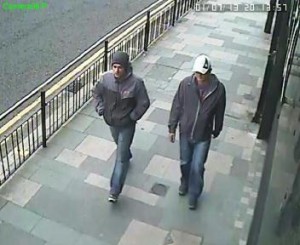 DETECTIVES in Downpatrick are seeking the public’s help in identifying two males they would like to speak to in connection with an armed robbery earlier this year.

The pair were spotted on CCTV a short distance from a garage forecourt where a man was punched and kicked to the ground and robbed at around 9pm on July 1.

The victim was also struck on the side of the head with a club hammer during the incident at the Market Street filling station.

Officers investigating the armed robbery would like to identify these two males and speak to them as part of their ongoing investigation.

They would ask anyone who believes they know either of these individuals to get in touch on 0845 600 8000.