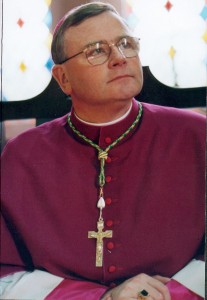 REBEL ‘Bishop’ Pat Buckley has dramatically pleaded guilty to his involvement in a sham marriage racket.

The majority of the marriages were carried out across the border in Co Louth.

However, the court heard that former newspaper columnist Buckley, 61, of Princes Gardens, Larne, was neither an instigator nor a profiteer of the scam.

He told investigators that he only ever received £300 for carrying out the weddings, his normal fee for legitimate weddings.

Belfast Crown Court heard he had allowed his naivety into thinking he was helping others, to blind him from the fact that what he was doing was wrong.

He will be sentenced next Thursday, December 19 for his crimes.

Five other charges dating from 2004 to 2009 were not proceeded with.

In court on Thursday, Mr Justice Mark Horner QC said he wished to re-consider the papers in the case and to review a defence file on Mr Buckley’s deteriorating health.

The judge was told that it was accepted, given his health and the facts, that this was “a highly exceptional case” that would allow the court to suspend any prison term.

Speaking outside Laganside Court after the case was heard, Mr Buckley said he was not attempting to hide what he had done, but described his guilt more as technical offending.

“I haven’t an anorak over my head. I’m still wearing my collar. I’m not slinking out,” he said.

“I feel a bit lighter to get something that’s been hanging over me for four or five years dealt with. But obviously, I have a heaviness of heart because technically, at 61, I now have a criminal conviction.”

Buckley shot to fame in the 1980s after a bitter public fall out with the then Catholic Bishop of Down and Connor Cathal Daly.

He was later kicked out of the Catholic Church but set up his own congregation in Larne, earning him the title of ‘Rebel Pat’.