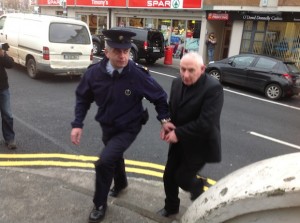 Sex beast Michael Ferry was locked up for another seven years after sickening details were given of how he defiled and abused another young boy up to three times per week at a school where he worked as a caretaker.

Evil Ferry, 58, was jailed at the Central Criminal Court in Dublin in 2011.

Brave victim Derek Mulligan waived his right to anonymity in that case so that Ferry could be named.

The paedophile had a previous conviction for sex attacks but kept his job with an Irish language college.

The victim in the case before Donegal Circuit Court today came forward to Gardai after Mr Mulligan spoke out.

It was confirmed in evidence today that Ferry – who sat with his head down in court – had worked as a teacher of religion, physical education and gave talks to students at on sexual education.

He groomed some of his victims there.

Garda Detective John Gallagher read a heart-breaking victim impact statement to the court in which the victim spoke of the effects of the abuse on him.

He said that he had been in a sex education class in Gweedore school where Ferry had discussed the 18-rated movie ‘Porkies’ with the class and the sexual scenes in the film.

Looking back, said the victim, the class was totally inappropriate.

Ferry later groomed him and launched his first attack at the building in March 1984.

The man could remember the date because he had bought an Irish language poetry and songbook that month and had written his date inside it.

The attacks continued up to three times per week until 1987.

After the first attack, Ferry gave his victim £2.

One another occasion the victim was stripped naked and photographed on a stage at the Irish language college.

Ferry, he said, would develop the photographs in a ‘dark room’ on the premises.

Counsel Desmond Murphy SC said his client admitted all the offences when interviewed by Gardai.

Reading from statements, he told the court that Ferry said he was “possessed by evil” and had fallen into “a spiral of evil.”

Mr Murphy said Ferry had joined the priesthood in 1974 but had left Maynooth in 1979 after “a disagreeable incident.”

He had returned to Gweedore and had landed on his feet.

Judge John O’Hagan, summing up the case, said the victim had been subjected to horrific abuse.

He said Ferry as a teacher was in a position of trust at a time in Ireland when people were taught to look up to educators.

“The breach of trust in a case like this is one of the most aggravating factors of this case,” said the judge.

“He taught religion, PE and sexual education; all matters of trust.”

Judge O’Hagan said Ferry would take pictures and tell his victim: “These are worth money.”

“His persistence and planning was quite remarkable,” said the judge.

Ferry would make payment with cigarettes “for his disgusting self-gratification.”

Judge O’Hagan recalled an incident where the victim was being abused when another boy arrived for a maths grind and interrupted the incident.

“I’m delighted to know that he (Ferry) has accepted he was possessed by something evil,” said the judge.

The judge said if Ferry had pleaded not guilty he would have imposed the maximum 10 years imprisonment.

“I hope he never has any involvement with any young people ever again,” said the judge.

He jailed Ferry for 7 years on each count to run concurrently, with sentences to run from today.