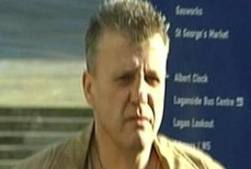 The PSNI wanted Courtney locked up as tensions continue to bubble in north and west Belfast between rival UDA factions.

Courtney is believed by police to be second-in-command of the UDA’s drug-dealing west Belfast Brigade.

It has locked horns with the north Belfast brigade run by John Bunting.

Factions within his brigade who have now aligned themselves with the west Belfast brigade are preparing a coup d’etat against Bunting in the coming days.

We revealed that he was arrested at his Fernhill Heights home in west Belfast around teatime on Monday.

He appeared in the dock of Belfast Magitrates’ Court late on Tuesday morning on the charge. He was also accused of harassing Tracey Coulter.

He was granted bail of £500 but banned from any contact with either Mr McCord or Ms Coulter.

He must also stay away from the home of Ms Coulter which was hit in a UDA arson attack two weeks ago.

It came days after he was convicted of headbutting Ms Coulter. He will be sentenced for assaulting her next month.

On Tuesday, Belfast Magistrates’ Court heard claims Mr Courtney directed an offensive remark and hand gesture at Tracey Coulter while she was in a car with Mr McCord on Monday.

Mr McCord, whose son Raymond jnr was murdered by the UVF in November 1997, was travelling in a car with Ms Coulter when the altercation took place between Millfield and Peter’s Hill in the city.

It was claimed that as their vehicle stopped at a junction Mr Courtney walked past, gestured at Ms Coulter and swore at her.

According to police, Mr McCord then got out and exchanged words with the accused.

The alleged threat was made at this point.

A defence lawyer said the harassment charge was based on a threatening phone call to Ms Coulter four months ago, which she claims came from Mr Courtney.

The court heard that Mr Courtney had repeatedly denied involvement, offered police his phone to examine and asked them to carry out voice analysis, the court heard.

His solicitor said that the alleged incident on Monday was not enough on its own to sustain a charge of conducting a course of harassment.

The district judge granted bail but she said that Mr Courtney was not to go near Ms Coulter, who lives a mile away from him.

Imposing a no-go zone, the judge allowed him to use transport on roads around the boundaries.

Mr Courtney, who must also report to police three times a week, is to appear again in court on Tuesday, January 7.