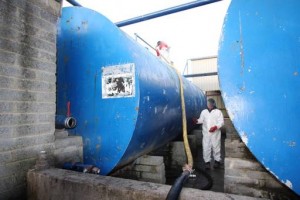 THIS is the “sophisticated” republican crime gang plant which produces over 40,000 litres of laundered fuel each day.

Customs officers discovered the plant in Crossmaglen, south Armagh following a long-running investigation into the activities of republican criminal gangs along the border who make a fortune from the fuel racket.

They say the gang had the potential to make millions of pounds of profit over the years if it had not been detected.

And the duty lost to the Exchequer was estimated to be around £10 million.

The raid came on the same day that the Director of Public Prosecutions Barra McGrory was given the powers to appeal sentences for excise evasion on the grounds of undue leniency.

The legislation is currently available to prosecutors in England and Wales.

During the operation to dismantle the plant, which lasted all day, around 20 tonnes deadly waste was discovered.

One man was arrested for questioning about the fraudulent evasion of duty under the Customs and Excise Management Act.

John Whiting of HMRC said more had to be done to eradicate a crime which costs the public purse tens of millions of pounds each year.

“It really is significant the amount of money can be made from this type of criminality.

“The public probably does not realise the amount of money that is available to those engaged in this crime.

“When they buy a tank of fuel from a filling station it probably comes down to pence and a few pounds.

“But when we build it right up through a laundry plant like we see here it’s many thousands and, over the years millions, of pounds which is the potential profit for the criminal.

“We do need a serious deterrent factor for those engaged in this crime,” added Mr Whiting.