ROBINSON AND MCGUINNESS MEET WITH BOSS OF FUJITSU IN JAPAN 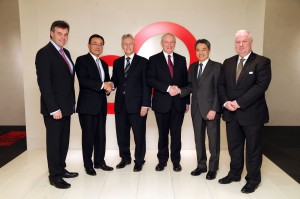 The Ministers thanked Fujitsu for its long standing commitment to Northern Ireland and discussed the possibility of further investment in the future.

As part of their visit the Ministers also enjoyed a tour of the company’s netCommunity technology demonstration centre.