PSNI TO SEND FILE TO PPS OVER IRA CASTELDERG PARADE 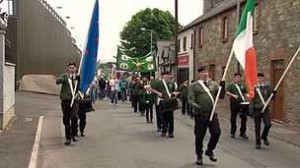 The IRA parade through Castlederg in August. Unionists say it breached the Parades Commission determinations.

THE Public Prosecution Service is to receive a police file shortly over breaches at a Castlederg republican parade in the summer.

The PSNI has confirmed that its investigation into the ‘Tyrone Volunteers’ Day’ parade on August 11 is now finished.

It now plans to send its file to the PPS with a view to prosecuting those who breached the determination of the Parades Commission governing the parade.

The Commission ruled that there should be “no paramilitary-style clothing is to be worn at any time during the parade and flags”.

It also said that “bannerettes and symbols relating to a proscribed organisation shall in no circumstances be displayed”.

And it further ordered that “there shall be no singing, chanting, or loud drumming and that marching should be dignified”.

The Sinn Féin organised event commemorated the 40th anniversary of the deaths of IRA members Seamus Harvey and Gerard McGlynn, along with the other 54 members of the IRA’s Tyrone Brigade and three Sinn Féin activists killed during the Troubles.

The parade attracted a large media and police presence, along with a protest led by Derg Valley Victims’ Voice.

Ulster Unionist Party councillor Derek Hussey told the Ulster Herald newspaper: “I welcome the fact that the PSNI have concluded their investigation.

“And it is now up to the PPS to come to their decision, which I hope will reflect the hurt that has been caused to a large section of the community in the Castlederg area.”