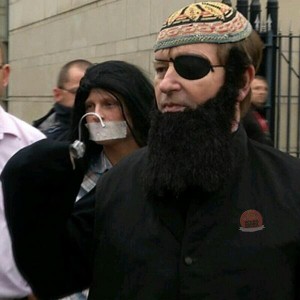 THE Parades Commission has imposed restrictions ‘bed push’ in north Belfast led by loyalist campaigner Willie Frazer saying it is not a “traditional parade”.

The ‘Push for Justice’ parade next week is part of a fundraising drive for victims to go to Libya to seek compensation for support for the IRA.

In its proposal to the Commission, ‘Push for Justice’ said the parade would include around 40 victims and supporters.

However, in its determination on Wednesday, the Commission said the ‘bed push’ is banned from going through the Ardoyne area and also from the city centre.

The ‘bed push’ is due to take place next Saturday, December 14.

The intended route according to organisers was to parade was from Ardoyne Road to the Crumlin Road to Woodvale, then on along the Shankill Road to city hall via North Street, Royal Avenue and Castle Place.

But this fell foul of the Parades Commission.

The Commission panel also refused to give permission for the ‘bed push’ to enter Belfast City Centre.

“We aware of the cumulative impact of parades and protests on the commercial life of the city, especially on Saturday afternoons”.

“The commission has been informed that this time of the year is traditionally one of the busiest times in the approach to Christmas and is crucial to help the survival of the already hard-pressed city centre traders,” it said.