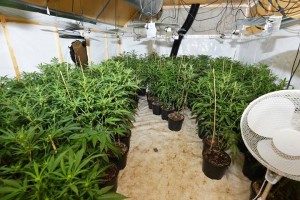 Police arrest two men after seizing £135,000 worth of cannabis plants in Ballymena

DETECTIVES are questioning two men after smashing a cannabis factory in Co Antrim.

The two men, aged 48 and 18 – were arrested following the discovery of estimated £135,000 worth of cannabis plants in Deerfin Road, Ballymena.

The two men are currently being questioned at Ballymena PSNI for offences under the Misuse of Drugs Act.

It is the latest success by police in Ballymena against those involved in cannabis cultivation and the distribution of drugs in the town.