THE Ulster Bank is to compensate customers left out of pocket after a computer glitch on ‘Cyber Monday’ night.

The problem at ATMs, with debit cards and online banking has now been fixed.

But furious customers were left without access to their money for hours on the busiest online shopping day of the year.

The Ulster Bank has apologised for the technical problems and said it would compensate anyone left out of pocket.

Around 750,000 customers from RBS, Natwest and Ulster Bank were hit.

The RBS Group, of which Ulster Banks is part of, said it was “very sorry for the system issues” but, as yet, it is unclear exactly what the “glitch” was.

In a statement issued on Tuesday, the bank said: “The systems issues that affected our customers last night have now been resolved and all our services are now back working normally.

“We would like to apologise to our customers. If anyone has been left out of pocket as a result of these systems problems, we will put this right.

“If any customer is experiencing issues this morning, they should get in touch with our call centres or come into our branches, where our staff will be ready to help.” 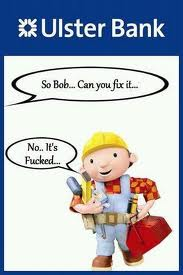 The cartoon which has appeared on Twitter mocking Ulster Bank

A group spokesperson added: “If anyone has been left out of pocket as a result of these systems problems, we will put this right.”

It it is the fifth computer fault in a year in involving Ulster Bank computers linked to RBS group network.

In 2012, thousands of customers were unable to withdraw cash or access their Ulster Bank accounts for weeks after a software upgrade on 19 June.

Ulster Bank paid out more than £18m in compensation to 300,000 people affected in Northern Ireland by that glitch.

The RBS group, which is 80%-owned by the UK government, said it had improved its services since the problems occurred in June and July of 2012.