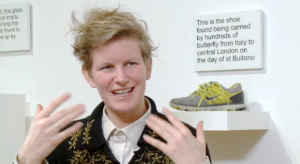 FRENCH artist Laure Prouvost is the surprise winner of the 2013 Turner Prize.

In winning, she is the only third non-British artist to win the prize.

Accepting the award, Prouvost was joined on stage by her infant daughter.

Speaking afterwards, she said: “I cannot believe it. I did not expect it. It is wonderful.”

Prouvost was nominated her new work Wantee 2013, commissioned with Grizedale Arts for inclusion in the exhibition Schwitters in Britain at Tate Britain and for her two-part installation for the Max Mara Art Prize for Women, resulting from a residency in Italy and presented in collaboration with the Whitechapel Gallery.

Her work will remain on display until 5 January next with that of the three other nominees in the new £2.4m exhibition centre at Ebrington in Derry.

Tino Sehgal had been the favourite with the bookmakers to take the top prize of £25,000.

The half-hour programme was presented Lauren Laverne with the winner announced by Irish actress Saoirse Ronan.

The Turner Prize is one of the highlights of Derry’s City of Culture celebrations and is the first time in its 29 year history it has been held outside the Tate Gallery in London.