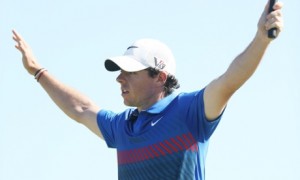 HOLYWOOD’S Rory McIlroy pipped Adam Scott to victory in the Australian Open to claim his first tournament victory of 2013.

Scott was leading by one shot with just the 72nd hole to play, but a bogey combined with a birdie from McIlroy denied him the chance to win the Australian ‘Triple Crown’.

McIlroy trailed by four shots going into the final round with the pair going head-to-head on the final day at Royal Sydney, the rest of the field needing a miracle to get into contention.

The former world No 1 made a big move on the seventh with an eagle and drew level with Scott when he birdied the eighth.

Scott edged ahead again but made a series of mistakes down the stretch, leaving McIlroy the chance to stay in touch.

And he made a club selection error at the last, hitting his approach way over the green and failing to make par, leaving McIlroy with the chance to win a first Australian Open, a chance he took with aplomb.

“I am gutted, I felt like I never had a better chance to win the Australian Open,” Scott said. “It was going to be a tough day, Rory made his move and I just couldn’t get my putts in.”

“Adam congratulated me on the green. It was hard not to feel some guilt in the way that I won it,” said McIlroy.

“To be able to play your best golf when you need to, when you’re under pressure, you can’t ask for more. The perfect scenario was to achieve a win before the end of the season and thankfully I have done that.”

McIlroy added: “It’s been a frustrating year but I’ve worked hard and it’s been a process, trying to get back to winning golf tournaments, and it was nice to do that today.

“I just sort of stayed patient, I knew that anything can happen on this golf course, if you just hit it into a tricky spot like Adam did on 18.

“Luckily I was just able to make that putt at the end when I needed it.

“It’s a very prestigious tournament and I am honoured to have my name on the trophy. I’m sure there is a lot of proud people who watched that today.”

John Senden won the race for third place, matching McIlroy’s round of 66 to finish on 11-under with Rhein Gibson and Bryden McPherson sharing fourth ahead of Jason Day, who finished on eight-under.