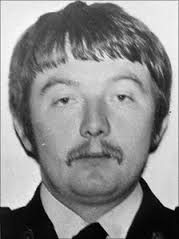 A CONVICTED terrorist found guilty today (Thursday) of the IRA murder of a part time RUC will only serve two years in jail of a life sentence.

Murder carries a life sentence but because the cold-blooded killing happened before the signing of the 1998 Good Friday Agreement, Kearney will only spend two years in prison under the terms of the peace accord.

Delivering his reserved judgement today, Judge McFarland said: “They came armed to kill, and they executed their plan.

“All the occupants of the car are guilty of murder.

“I am satisfied the defendant was either the gunman, the driver of the Ford Escort RS200 [getaway car] or was an occupant of the car being present to provide support for the killing”.

Kearney, from Gorteade Road in Swatragh, Co Londonderry, had denied the murder of the 25-year-old reservist and possessing the Armalite AR15 assault rifle used to shoot him dead minutes after visiting his wife June, and new-born son, John Jr, at the Mid-Ulster Hospital on 14 September, 1981.

Added Judge McFarland: “In all of the circumstances I am satisfied beyond a reasonable doubt that the defendant had smoked the cigarette and having finished smoking it, discarded it at or about the time of the shooting”.

Reserve Constable John Proctor was shot dead in a hail of automatic gunfire at a hospital car park in Co L’Derry minutes after visiting his wife and new-born son.

During Kearney’s trial it was alleged that a cigarette butt found among spent bullet casings after the shooting contained a full profile of DNA of Kearney.

A prosecution lawyer told the non-jury Diplock trial that Mr Proctor (25) was visiting his wife Kathleen at the Mid Ulster Hospital on September 14, 1981 when terrorists struck in the lower car park of the hospital grounds.

“It is alleged the defendant was part of that terrorist group that carried out the attack on Mr Proctor and he is responsible for the murder in joint enterprise,’’ said counsel.

He told Belfast Recorder Judge David McFarland that Mr Proctor had parked his black Chrysler Talbot Sunbeam car, registration number DIW 9966, in the car park and went inside to visit his wife.

“Around 9pm, Kathleen Proctor walked down the corridor with her husband and said her goodbyes to him. She left him to go outside and said goodbyes to him from a window. A few minutes later she heard shots.’’

The lawyer said witness Diane Herron told police she was in the carpark and saw “a man with a gun and saw him crouching down as if to shoot and then she heard a number of shots’’.

Another witness said he was visiting his wife in hospital and saw Mr Proctor walking to his car and heard ‘crack, crack, crack’.

“He then saw a white Ford Escort with a black roof scream past and the tyres spinning on the gravel in the car park.’’

The lawyer added that Mr Proctor sustained gunshot wounds to his chest and abdomen caused by high velocity bullets. He was rushed to hospital but later died from his injuries.

Judge McFarland was told that a short time before the murder, a man entered a house on the Derrynoid Road in Draperstown.

The man told the family: “We are from the Provisional IRA. We want your car.’’ The car was a white Ford Escort RS2000, registration number CIW 8938.

When the man left with the car keys, he told the family: “Don’t phone the police for an hour.’’

Witness Stephen Wylie told police that he was in the Tobermore area around 9pm on September 14 when he saw a white Ford Escort RS2000 with a number of people on board travelling at speed.

“Because of the speed at which it was travelling at, he noted down its registration number, CIW 8938. He said there was a second car travelling tight on its tail.’’

During follow up inquiries, RUC officers recovered the RS2000 car on the Derrynoid Road not far where it had been stolen. A forensic examination of the car provided no clues to the gunmen.

The crown lawyer said 13 spent bullet casings were found at the scene along with two cigarette butts.

One cigarette had no DNA profile, however, he claimed the second butt was found to contain DNA.

As part of a historical review of the evidence, the second butt was tested and found to contain a full DNA profile of the accused.

“The chances of it being the profile of any other man is said to be one in one billion chance,’’ said the prosecution.

The court heard the AR15 rifle was later recoverd on February 18, 1986 following a shooting on the Hillhead Road, between Toomebdrige and Castledawson.

Ballistic tests on the weapon revealed that the gun had been used in the murder of Constable Proctor, the attempted murder of UDR soldiers on November 8, 1982 in Swatragh, Co Derry and also the shooting incident on the Hillhead Road in 1986.

The crown lawyer said Kearney was convicted on December 21, 1984 for the attempted murder of the UDR soldiers.

They were driving through Swatragh in the directon of Maghera in November 1982 in a land rover when the rear of their vehicle came under gun attack.

Kearney was arrested at his Gorteade Road home on suspicion of Mr Proctor’s murder by detectives from the PSNI’s Serious Crime Branch in July and September 2010.

The lawyers said the accused was cautioned and made no reply.

He was taken to the serious crime suite in Antrim for questioning about the Mr Proctor’s murder but made no reply throughout the interviews.

The Crown lawyer said Kearney was linked to the murder through his DNA being found at the scene on the cigarette and also because the weapon used to kill the RUC man was used in a murder bid on a UDR patrol of which he was subsequently convicted.

“We say that is evidence of bad character on behalf of the defendant,’’ he added.

Judge McFarland agreed and found Kearney guilty of the murder.