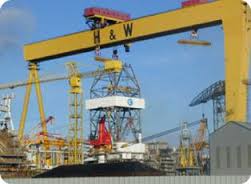 A FORMER site manager at Harland and Wolff was jailed for four months today for stealing scrap metal from the shipyard worth over £17,000.

Belfast Crown court heard that management at the company received an anonymous letter about the theft of scrap metal which sparked an internal investigation.

Prosecuting counsel Philip Henry said quantities of scrap metal from the shipyard were taken by van and forklift to a nearby recyling centre to be sold.

He told Recorder Judge David McFarland that cheques for the scrap metal should have been made out to Harland and Wolff.

However, the cheques were made out in Hutchinson’s name on 41 separates occasions over the period of the year which totalled £17,225.15p.

The lawyer said Hutchinson, of Sheringhurst Park, Belfast, had “breached his position of trust” in his role as a foreman who was allowed to remove the metal off the site to be scrapped.

The court heard that Hutchinson was to be sacked for gross misconduct after admitting the theft but “walked out” before the end of a disciplinary meeting and later resigned from the company after 40 years service.

He said married Hutchinson had a previous conviction for theft in 1973.

A defence solicitor said the practice of taking the metal from the shipyard to be scrapped and sold off had become “part and parcel of the job”.

“The monies were divided up with other members of staff who would go for a drink after work,” said the solicitor.

“On one occasion the monies were given to a man who was retiring from the shipyard.”

Judge McFarland said Hutchinson had “breached the trust” of his employers by selling of the scrap metal and keeping the money.

Sentencing Hutchinson to four months in prison, the judge also made a compensation for £17,225.16p which is to be repaid within six months.