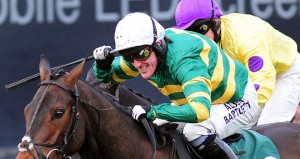 IT’S that time of the year again and the votes are ready set to be cast for next month’s BBC Sports Personality of the Year award.

And Co Antrim jockety AP McCoy – who recently rode his 4,000th winner – is among a short list of ten who are who include athletes Mo Farah, Christine Ohuruogu and Hannah Cockroft, tennis player Andy Murray and cyclist Chris Froome.

The public will vote for their favourite on Sunday, 15 December.

Voting for the main award will be by phone and, for the first time, online during the programme, which will be presented by Gary Lineker, Clare Balding and Gabby Logan.

In front of an expected 12,000 crowd at the First Direct Arena in Leeds, the latest name to join an illustrious roll of honour will be announced.

With an array of candidates to choose from, an expert panel faced some difficult choices finalising the shortlist.