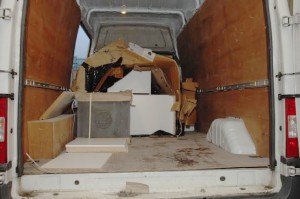 The van McPhillips used to transport the £800k of cannabis

THE leader of aN organised crime gang, caught red-handed bringing £800,000 worth of drugs, was jailed for seven years today (Monday).

Police have welcomed the sentence handed down to Mark McPhillips (34), saying the city was a “safer place” as a result of the jail term.

McPhillips, of Elmvale in the Culmore area of Derry, pleaded guilty to having £800,000 worth of cannabis, possession of other drugs, importing drugs and money laundering.

Three and a half years will be in jail, the remainder on licence.

McPhillips was stopped by police in the Glengalliagh area of Derry in May last year.

He was driving a hire van carrying kitchen units.

When police examined the units, they found bags of herbal cannabis worth £800,000 which had been imported from Holland.

Detectives from the PSNI crime squad have welcomed the sentence.

Detective Superintendent Andrea McMullan, from Organised Crime Branch the find was as a result of a “proactive operation” against an organised crime group involved in the importation and distribution of large quantities of controlled drugs into Northern Ireland and the Republic from Holland.

She added: “While it is unusual for the leader of a crime group to personally move such a quantity of drugs, we believe Mark McPhillips took a chance on this occasion and has paid the price.”

DS McMullan said the “price” amounted to more than a prison sentence as, following an extensive financial investigation, police believed McPhillips had benefitted substantially from the supply of controlled drugs and these proceeds of crime would now be the subject of confiscation proceedings.

She added: “We view this as a very significant detection which was the result of good police work.

“The community should be assured that we will take every available, lawful opportunity to apprehend criminals involved in illegal drugs.

“We will work with individuals, communities and partners to bring offenders before the courts where they will be dealt with as the criminal justice system deems appropriate.

“The people of Derry and further afield are safer today thanks to this prison sentence. I would urge everyone to continue to work with us to identify and locate those criminals who make financial gain through other people’s misery.”

DS McMullan concluded: “We will act on the information promptly and in a way which acts as a deterrent, not a death sentence.”