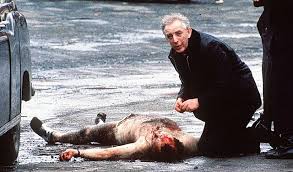 POLITICIANS have paid tribute to Fr Alec Reid who has died in Dublin after battling an illness.

Fr Reid has been regarded as a key figure in the Northern Ireland peace process.

For over a decade the Redemptorist priest had acted as a secret go-between between the IRA leadership of Gerry Adams and Martin McGuinness and the SDLP.

Fr Reid’s funeral will take place at 12 midday on Wednesday after requiem Mass in Clonard church in west Belfast.

Along with the Rev Harold Goode, Fr Reid was witness the decommissioning of IRA weapons.

In recent years, he was involved in talks with Basque nationalists seeking independence from Spain.

He hit the international headlines when he was photographed in the Sunday Mirror praying over the bodies of Army corporals Derek Wood and David Howes who had been dragged from their car, beaten and shot by the IRA.

The Royal Corps of Signals who were unattachment to an intelligence unit were gathering intelligence at an IRA funeral when their car got surrounded by an IRA mob.

After the IRA kidnapped the two corporals, they were stripped to the underwear and shot in the back of the heads in a cold-blooded execution.

“His comfort was given amidst the enormous fears and tension on that terrible day in March 1988.”

Sinn Féin president Gerry Adams said Clonard monastery, Fr Reid’s base in west Belfast during the Troubles, was “the cradle of the peace process”.

He told RTÉ Radio he was with Fr Reid on Thursday night in St Vincent’s Hospital, Dublin, and had been due to visit him again on Friday.

“What Alec Reid did was, he lived the gospel message. He developed a view which was contrary to the official view, that there had to be dialogue, and he was tenacious.”

Northern Ireland Secretary of State Theresa Villiers, said: “I heard with sadness of the death of Fr Reid.

“We all owe a debt of gratitude to him for the role he played in the peace and reconciliation process in Northern Ireland.”

Former SDLP leader John Hume said Fr Reid was “not simply a go between” in the early days of negotiating for peace.

“He was an active player in fighting for an end to violence,” Mr Hume said.

“Without his courage, determination and utter selflessness, the road to peace in our region would have been much longer and much more difficult to traverse.

“While we mourn the loss of a great man, we must also celebrate the legacy of peace and an opportunity to reconcile our people that he gave to us. It is an opportunity we cannot afford to waste.”

Michael D Higgins, the president of Ireland, said: “His ministering of the last rites to the two British corporals brutally killed in 1988 offered us an image of decency struggling to assert itself amidst brutality.”