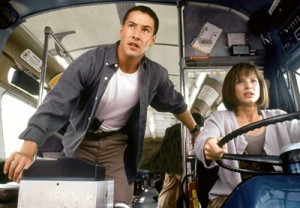 During the incident in Derry a female Translink driver was left traumatised after a bomb was placed on her bus.

The woman, in her 30s, has received widespread praise for her bravery for driving the bus out the densely populated Ballymagroarty housing estate to a “safer place.”

A masked man, who said he was from the “IRA,” had placed the bomb on the seat directly behind the driver and told her to drive it to police headquarters on Strand Road in the city centre.

However, after travelling for ahout a mile, she pulled the vehicle into a bus stop on Northland Road before raising the alarm.

Around 7o residents in the Liscannor Park and Springvale Park areas were moved out of their homes and a number of businesses in the area evacuated during the nine hour alert which ended at just after 3.30am yesterday.

During the alert, Mr Durkan took to Twitter to post a message that included a reference to the 1994 blockbuster “SPEED” in which a bomb is planted on a bus.

In the film, Sandra Bullock takes to the wheel of the bus to prevent it from dropping below 50mph in order to prevent the bomb exploding.

Mr Durkan has been slammed by Sinn Fein Councillor Eric McGinley who said the comment was “unbecoming of a government minister.”

Cllr McGinley said: “I was shocked and disappointed when a tweet sent by Minister Mark H Durkan, seemingly making light of the serious incident, was brought to my attention.

“The tweet commented that he would keep people ‘up to SPEED’ on the incident.

“Intentionally or not, the fact that speed was in capital letters portrayed the perception that he was comparing this incident, in which a female bus driver was traumatised, with the film ‘SPEED’ in which a bomb was placed on a bus and the female driver made to follow specific instructions or the bomb would explode.”

Cllr McGinley concluded: “I believe that this comment was crass, insensitive and unbecoming of a government minister.”