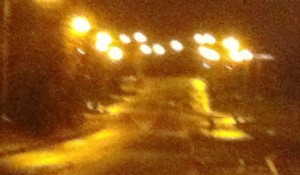 A FEMALE Ulsterbus driver has been hailed a heroine after refusing to transport a bomb to a police station – and getting her vehicle to “as safe a place as possible.”

The quick-thinking driver was told to drive her bus with the device on board to Strand Road barracks.

Instead she drove around a mile from Ballymagroarty to the Northland Road and left the bus there instead.

“Her first priority was to get the bus away from the built-up area around Ballymagroarty,” said one senior PSNI officer.

“Those responsible for this incident had no regard for the driver or the effects such an experience can have on someone who is serving her community.”

There is a great deal of anger in Derry at the latest dissident incident which is causing severe disruption in the city.

The incident has been condemned as “unacceptable” by SDLP councillor for the area, John Boyle.

Cllr Boyle, who visited the scene, said the alert was “very distressing” for residents.

He said anyone with information should contact the PSNI.

The alert began after 6.00pm when the device was placed on the bus in the densely populated Ballymagroarty estate and the driver told to take it to PSNI headquarters on Strand Road in the city centre.

However, she pulled the vehicle into a bus stop on Northland Road before abandoning it and alerting police.

A number of residents. including an elderly wheelchair user, were moved out of their homes in the Foyle Springs and Springvale Park areas.

The Northland Road was closed between Branch Roundabout and Springtown Road and police advised motorists to avoid the area.