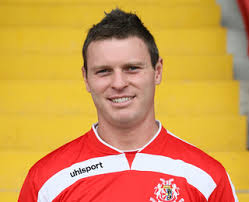 In a statement the club said it was “open to offers” for Braniff.

There had been rumblings at Shamrock Park within the past few weeks of a “bust-up” between Braniff and manager Ronnie McFaul.

Things didn’t improve for the club when they crashed out on Tuesday night of the League Cup.

Ballymena Utd thrashed them 4-0 at the Showgrounds.

At one stage, Portadown were flying high in the league, even going top.