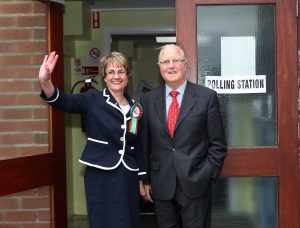 POLITICIANS across the political spectrum have been paying tributes to the late Edde McGrady.

The 78-year-old politician and keen environmentalist died at 4 pm on Monday in the Down Hospital in Downpatrick, Co Down following a battle against illness.

The former MP for South Down was surrounded at his bedside by his close family when he passed away.

The trained chartered accountant entered politics in 1961 as an independent on Down Urban Council.

He took the south Down seat from the sitting Ulster Unionist MP Enoch Powell in 1987 with just over 700 votes.

However, when he stepped down in 2010, his majority over his Sinn Fein rival Catriona Ruane was 10,000 votes.

Margaret Ritchie, who use to work for Mr McGrady, replaced him as MP and later retained the seat.

His funeral is expected to place later this week at St Patrick’s Catholic Church in Downpatrick.

Mr McGrady, who was one of 11 children, was one of the founding members of the SDLP.

The Nobel Laureate said: “Eddie McGrady was a man of deep faith, considerable courage, incredible fortitude and unswerving in his dedication to peace.”

Close friend and SDLP MLA Joe Byrne described Mr McGrady as “a man of principle, strong faith and dedication to serving the public”.

“He was a gentleman at all times,” said Mr Byrne.

“I had the pleasure of sèrving with him on the first Policing Board. Eddy Mc Grady was Sdlp through and through.

“I visited him two weeks ago and had a good chat.

“Tonight I am deeply saddened at the the passing of one of Northern Ireland’s greatest politicians.

“Eddie played a vital role in the delivery of the peace process and has been a strong voice for the people of South Down as their MP from 1987- 2010.

“He was a pillar of strength for all people at the most difficult of times, a man of great integrity and a Leader of the peace process. Tonight we mourn a great loss for Eddie was the Peoples Politician! May he rest in peace and his memory live strong.”

DUP Health Minister Edwin Poots tweeted: “Sorry to learn if the death of Eddie McGrady, a true gentleman who worked extremely hard for his constituents.”

Justice Minister and Alliance Party leader David Ford said: “I was very saddened to learn of the passing of Eddie McGrady, who fought hard to bring an end to violence in Northern Ireland during the Troubles.

“The well-known MP was a fierce critic of those who used violence and murder as a means to delivering their political objectives,” he added.

“As a Councillor, MLA and then MP for South Down, Mr McGrady worked hard for all his constituents.  His tireless work went a great way to calming tensions in the area, helping create the more stable, peaceful Northern Ireland we have all experienced in recent years.

“His contribution to Northern Ireland politics has been great, both as a campaigner for peace and the desire to make a difference to the lives of those he represented.

“I would like to extend my deepest sympathies to the extended McGrady family and surrounding circle at this sad time.”