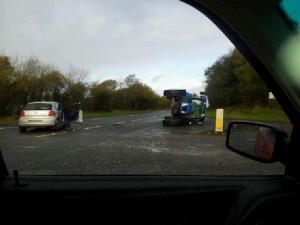 A farmer who died in a freak accident when his tractor toppled over on Friday has been named.

Mr Lipsett, from Cashel in Rossnowlagh, Co Donegal, died instantly following the collision on the N13 at Ballintra outside Donegal Town around 10 am.

The accident happened almost five years to the day when three men died on the same stretch of road.

Local Ballyshannon councillor PJ Branley, his friend Dessie McNulty and another man travelling in the opposite direction died following a two car smash.

Gardai sealed off the area and crash collision investigators carried out a full examination of the scene.

The driver of the other vehicle was amazingly unhurt in the crash.

A spokesman confirmed the farmer died at the scene but that the driver of the car was uninjured.

A spokesman said “Gardai are investigating a fatal road traffic collision involving a tractor and car on the N15 at Ballintra, Co. Donegal this morning 8th November 2013.

“The driver of tractor, a man in his early 50s, was pronounced dead at the scene. The driver of car was not injured.

“Garda Forensic Collision Investigators are carrying out an examination at the scene and diversions are in place in the area. ”

There was some confusion following the crash after reports of another body being found close to the scene at the same time.

It later emerged that a second body had ben found some miles away at Ballinacarragh, Ballintra.

The body was found in a ditch but Gardai say the death is accidental and the incidents are not related.

Local councillor Brendan Travers said it was a dark day for Ballintra.

“My sympathies go to the families of both men. A lot of people are in shock around here.

“One death is bad enough but two on the one day in such a small community has left people in a state of disbelief,” he said.