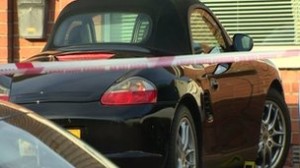 As a result, police chiefs have warned all personnel to redouble their personal security checks.

They believe Friday morning’s murder bid is the latest in a “planned phase” of attacks on police officers, off duty, on duty and now retired.

A senior security source told Belfast Daily: “We have been on high alert in recent weeks and months over the dissident republican threat.

“Friday morning’s murder bid on a former detective is the latest in a planned phase of attacks by dissidents to kill officer at home or while on duty.

“We have had pipe bomb attacks, rocket launcher finds, letter bombs in the post and now a UCBT.

“We are living in very dangerous times. Staff have been put on a high alert.”

The PSNI said the device found under the former detective’s black car at King’s Road in east Belfast was a viable device.

They said the man spotted the device when he checked under his vehicle at Kingsway Park, near Tullycarnet estate.

The man was about to take his 12-year-old daughter to school.

A police spokesman said it was only due to the vigilance of the former officer that no-one was killed or seriously injured.

First Minister Peter Robinson and deputy First Minister Martin McGuinness reacted to the incident after emerging from a meeting in Armagh with Irish Prime Minister Enda Kenny and his deputy Eamon Gilmore.

Mr Robinson said: “There are some elements of our society who have not caught the public mood that wants to move forward and see progress made.

“There are people that want to drag us back. Politically they will not break the progress that has been made, we will continue to work together to make a better community for the people that live here.”

Mr McGuinness said the Stormont Executive was “going to ensure the dissidents did not succeed”.

“The best way that we can prevent those involved in these types of activities is to make it clear to every citizen on the island who supports the peace process that they have a duty and responsibility to pass on whatever information they have,” he said.

“In recent weeks, my colleagues and I have talked about an upsurge in dissident republican activity and today’s events serve as a reminder to us all of the current severe threat,” he said.

“I would urge everyone to remain extremely vigilant and report anything unusual or suspicious.”

“Those behind this murder attempt have once again shown an utter disregard for human life, not only for the life of someone who served the community, but also his family and others living in the area,” he said.

“These devices are unstable and do not discriminate when they cause injury or death.

“I commend the vigilance of the former officer. Without it we could be facing a very different scenario.”