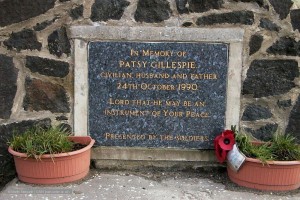 The memorial stone erectted at the scene of the Coshquin bombing.

THE widow Patsy Gillespie, who was killed when the IRA “proxy bomb” he was forced to drive to a border checkpoint exploded while he was still in the driver’s seat, has said she wants “justice” for her husband.

Five British solders also died in the incident which occurred at a permanent checkpoint at Coshquin on the main Derry to Buncrana Road on October 24, 1990.

Kathleen Gillespie was speaking after Sinn Fein’s Martin McGuinness told an Oxford Union debate in England he did not know who was reponsible for the attack and that the IRA did not target civilians.

Mrs Gillespie said she was aware of reports of security force collusion in the incident and that she had carried out her “own investigation” and passed the results on to the Historical Enquiries Team.

She rejected Mr McGuinness’s claim that the IRA did not target civilians.

She said: “No matter what anyone says, my husband was a civilian worker with the Ministry of Defence.”

She added: “I don’t want revenge, I want justice. I want to know why my husband was murdered and who did it.”

The Coshquin attack was one of three synchronised bombings which took on 24 October 1990 – the others occurred at Cloghoge (near Newry) and Omagh.

“Proxy bomb” attacks were when the IRA forced people to drive cars/vans packed with high explosives to specific targets and give warnings.

However, in the Coshquin, Newry and Omagh attacks the drivers were believed to have been strapped into their vehicles.

RUC Special Branch had received some intelligence about the Coshquin operation but said it was only a “vague outline” of an “impending assault against a base” in the area.

Catholic Patrick “Patsy” Gillespie (42) lived in the Leafair area of Shantallow in Derry and worked as a cook in Fort George British Army base located at the junction of Culmore and Buncrana Roads in the city.

Four years prior to the his killing, the IRA had forced him to drive a bomb into the base.

On that occasion she was able go get out the vehicle and shout a warning.

However, the bomb failed to detonate.

On the night he was killed, he was taken from his home at gunpuint and put in a van packed with 1,000 lbs of explosives and forced to drive it to the Coshquin checkpoint.

The bomb exploded at 3.55 am while he was still in the driver’s seat.

The bomb devastated the base, destroying the operations room and a number of armoured vehicles.

The blast also damaged 25 nearby houses and the adjacent Three Flowers pub which was demolished and rebuilt some years later.

One soldier was killed in the Cloghoge incident after James McAvoy (65) was forced to drive a van with a ton of explosives on board to a permanent vehicle checkpoint. Mr McAvoy stopped the van a short distance from the checkpoint and got away through a window before the bomb exploded. He escaped with a broken leg.

The Omagh bombing followed a similar pattern – a man was strapped into a car and forced to drive it to Lisanelly British Army base in the town while his family was held at gunpoint. However the device, which weighed 1,500 lbs, failed to explode due to a faulty detonator.