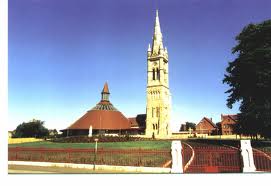 A SECOND Catholic priest has been left badly shaken in the latest robbery on their parochial homes.

On Tuesday, robbers went into a Catholic church in Holywood, Co Down and threatened parish priest Fr Peter O’Kane, who was praying at the time, with a hammer around 6.20 pm.

The pair then forced him into the parochial house beside St Colmcille’s Church, High Street, Holywood.

The two robbers then fled with money and the priest’s mobile phone.

Detectives at Bangor CID have appealed for anyone with information about the robbery to contact them on 0845 60 8000.

Last week, a parish priest in Jonesborough, south Armagh was robbed and had his nose broken during a hold up.

Church leaders said they are concerned about the targeting of priests while at home.

Down and Connor Catholic Church spokesman Fr Eddie McGee said Fr O’Kane had been in the church to say the rosary when he was accosted by the two men.

“It appears that they approached Fr O’Kane armed with a hammer and threatened him, asking him for money,” he said.

Fr McGee said his colleague had been left very distressed by the incident, and condemned recent attacks on clergy.

“There appears to be over the past number of weeks a growing tendency of attacks on clergy who are very vulnerable. These attacks are very, very distressing for those concerned.”

The attack has been condemned by local politicians who said local people were “appalled” at the robbery.

The Alliance Party’s Mayor of North Down, Councillor Andrew Muir, said: “The local community are very saddened by what has happened.

“I would appeal to anyone with information to come forward and give it to the police.

“The PSNI need this information in order to bring these two people before the courts.”