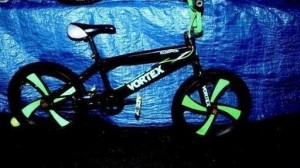 MURDERSQUAD detectives hunting the ‘IRA’ killers of drug dealer Kevin Kearney have released a picture of a BMX bike which may have been used in the hit.

Officers from the PSNI’s Serious Crime Branch believe the bike may have been used by someone involved in the murder, possibly a scout for the killers,

Kevin Kearney was found dead in a lake in Alexandra Park, off the Antrim Road, on 9 October.

The 46-year-old had been shot dead the previous day. Dissident republicans said they killed Mr Kearney.

Detectives have appealed for information about a Vortex Scorpion bike.

Police said it was one of a number of lines of inquiry being examined.

“We believe the Vortex Scorpion bike may have been used by someone involved in the shooting,” he said.

Police have conducted fresh house-to-house inquiries in the area.

Detectives have previously said a drugs motive was one line of inquiry.

Following the murder,  a group calling itself the new ‘IRA’ claimed responsibility for the “execution” saying it had been carried out in response from the local community.