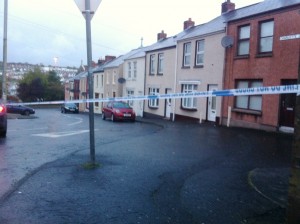 DETECTIVES investigating a pipe bomb attack almost two weeks ago say they are anxious to speak to a couple seen in the area at the time.

A number of families were moved out of their homes in Derry’s Charlotte Street on October 22 after the device failed to explode when it was thrown at a police patrol around 10.00 pm.

Officers from the PSNI’s Terrorist Investigation Unit (TIU) said the device in the Lower Tower area had the capability of causing serious injury or death.

A PSNI spokesperson said detectives investigating the incident wanted to speak to a male and female who were in the area at the time.

The spokesperson said: “The device was thrown at the patrol car but missed its target and fortunately did not detonate.

“The couple were wearing dark clothing and the female had long dark hair.

“This couple may have witnessed the attack and police are keen to speak with them.”