A SENIOR UVF figure who was once on the payroll of the RUC Special Branch is facing the chop from a local police group in west Belfast.

Winston ‘Winky’ Irvine – the UVF’s ‘B’ Company Woodvale commander – is to have his position reviewed on a policing and community safety partnership by the Policing Board.

The review will centre on a declaration members make on appointment to those partnerships.

The declaration states that a partnership member will not by word or deed support a proscribed organisation or acts of terrorism.

Irvine has been a member of the UVF for almost two decades.

The UVF once sent him out to shoot a Catholic breadserver in the Woodvale district as a “test”.

However, he failed the “test” when he dropped the 9mm handgun and fled the scene. The weapon was later recovered by the RUC.

But his role in the murder bid was covered up by his handlers in RUC Special Branch and ‘Winky’ Irvine was never arrested or charged.

Irvine also earns around £27,000 a year as a “community worker” in west Belfast along with being a PUP representative.

He has been tipped to be stand in the next council elections to replace long standing PUP councillor Alderman Hugh Smyth.

However, sources on the Shankill say he is not popular with the public despite his high profile in the media over the Twaddell Avenue protest.

Said a loyalist source: “The Spotlight programme has really put him behind the eight ball.

“He is never off the TV but when a BBC reporter wants to put a hard question to him about his role in the UVF he doesn’t want to go up in front of the cameras.

“It says it all about ‘Winky’. There are more balls in a trout.”

Balding Irvine was one of four UVF figures who went to the High Court in Belfast this week in a bid to stop the Spotlight programme from being aired. 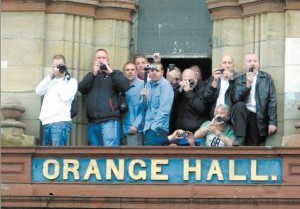 All four have been named in depositions by former south east Antrim brigadier Gary Haggarty to detectives from the Historical Enquiries Team.

Father-of-three Haggarty secretly recorded UVF meetings, including those of the organisation brigade staff.

It is understood up to 16 high ranking UVF figures face arrest and charging on the word of Haggarty in the coming months.

Haggarty is currently in a witness protection scheme in England awaiting sentence for a UVF murder.


9 Responses to UVF INFORMER FACES AXE BY POLICING BOARD