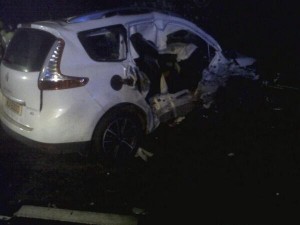 One of the cars, a Renault Megane Scenie, involved in the four vehicle pile up in Co Fermanagh on Friday night

A WOMAN has tragically died following a major four car pile up.

The 59-year-old woman was one of nine people – including three children – who were hurt during the pile up in Co Fermanagh on Friday night.

It is understood the victims sustained mostly back and neck injuries.

The NI Ambulance Service said paramedic crews attended what it described as a “major incident”.

The crash happened on the A4 road between Brookborough and Fivemiletown.

“Because of the numbers involved, we were told possibly seven patients. We sent eight ambulances, three rapid response vehicles and a number of officers to the scene.

The PSNI has asked motorists to avoid the area if at all possible.

The road is now closed and traffic is being diverted via Clabby and Tempo.