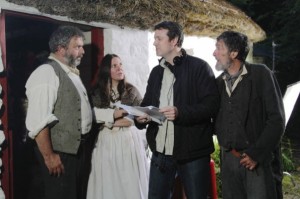 A CHILLING new horror drama penned by a Northern Ireland writer is to be screened on television tonight.

“Stumpy’s Brae,” by Darren Gibson from Eglinton, Co Derry, will be shown on BBC Two Northern Ireland at 10.00 pm.

Directed by Chris Baugh, from Omagh, Co Tyrone, and produced by Brendan Mullin for BBC Northern Ireland through their Belfast-based company Six Mile Hill Productions, the the 30-minute drama has been described as a dark and gruesome tale of temptation, murder and revenge.

The drama is in Ulster Scots and adapted from the eponymous poem by celebrated writer Cecil Frances Alexander, famous for penning hymns such as “Once in Royal David’s City’” and “All Things Bright and Beautiful.”

He said: “For me Stumpy’s Brae was a unique chance to bring to life our rich literary heritage. It encapsulates, flawlessly, the quintessential qualities of Northern Ireland: our dry wit, strong resolve and stern passions.”

Starring Nigel O’Neill, Louise Matthews and Lalor Roddy, the production was shot on location at the Ulster Folk and Transport Museum at Cultra and The Ulster American Folk Park outside Omagh.

He added: “We wanted to add a fresh, modern, ‘horror movie’ feel that sharpens the sting of this creepy tale. By collaborating with a talented cast and crew we feel we’ve produced a strong drama that will appeal to those who also enjoy a good scare.”