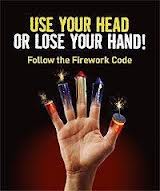 * when buying fireworks, make sure they comply with BS 7114 or its European equivalent and are clearly marked for their intended use “Indoor, Garden or Display”.

• Take care of sparklers; wear gloves to hold them and dispose of sparklers in a bucket of water as soon as they are finished.

• Don’t set off noisy fireworks late at night and never after 11 pm.