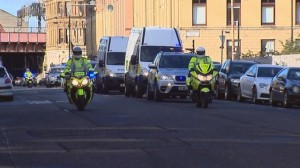 MI5 officers posed as ‘agents’ during the lengthy undercover operation against those sympathetic to the dissident terror campaign.

The PSNI’s ‘C3’ Intelligence Branch and MI5 officers based in Northern Ireland and Scotland were heavily involved in setting up the ‘sting’.

As part of the operation, the suspects were secretly recorded trying to buy weapons from the MI5 ‘agents’.

“This has been a long running undercover operation involving MI5, ‘C3’ and Police Scotland,” said a security source.

“Surveillance had been carried for a quite of time both in Northern Ireland and Scotland involving scores of officers.

“There had been intelligence that people with sympathies towards the dissident campaign who had been raising funds at a number of events. Officers followed the trail which led to a covert operation being mounted.”

On Tuesday, four men and a woman appeared in court charged with conspiring to commit acts of terrorism.

All are also alleged to have conspired to murder.

They are charged with planning between February 1 and October 23 at a property on Old Castle Road, Cathcart, Glasgow to commit acts of terrorism.

They are all accused of plotting to carry out a terrorist campaign in the UK.

It is alleged they tried to get a hold of firearms and explosives with a view to carrying out terrorist offences, including “damage to property and murder of civilians”.

They appeared at Glasgow Sheriff’s Court amid  convoy of police motorbikes, police cars and vans.

They each appeared separately in private at session where they made no plea or declaration and were remanded in custody by sheriff Ian Miller.

They are due to appear next week for full committal.

After the operation, Police Scotland said it had focused on the “activities of individuals sympathetic to dissident Republicanism, but who are not affiliated to any specific group”.

All five people had been held at the Scottish Terrorist Detention Centre in the Govan area of Glasgow following their arrest on October 23.