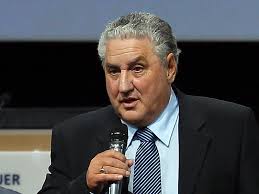 WORLD football chiefs could hit Irish League clubs where it hurts in a bid to stamp out sectarian chanting at matches.

Fines could be ditched to be replaced by points deduction and playing games behind closed doors.

It follows sectarian chanting during the semi final of the County Antrim shield match at Winsdor Park between arch rivals Linfield and Cliftonville.

The Blues ran out 4-1 winners.

Sections from both sets of supporters were involved in the sectarian chanting.

And referee Hugh Carvill at one point asked for an announcement to be made, urging fans to call a halt to the chanting.

Said Jim Boyce: “Guidelines are being brought in by Fifa and Uefa as the days of fining clubs are a waste of time,” said Boyce.

“Sanctions include playing games behind closed doors and deducting points.”

Boyce described the behaviour of some fans as “pathetic”.

“Last night was the first time for quite a long time that I’ve heard it as bad as it was for a short period, but these days we shouldn’t have to listen to it at all.

“Clubs have to take this issue seriously because if it is reported to Fifa or Uefa and the local authorities do not take action, Fifa and Uefa will be forced to intervene.

“Last night the referee felt compelled to take action and I admire him for taking a stand to eradicate this sort of thing.

“Options being discussed for the future include the closure of sections of the ground where this behaviour occurs, ordering games to be played behind closed doors and, if it continues, points could be taken off clubs. People who indulge in this behaviour don’t care about fines.

“Since stewarding was introduced at Irish League matches things have improved 90%, it’s nothing like it used to be in the past, but it still should not have happened.

“Players on the pitch of all religions should not have to listen to these idiots and if they want to indulge in sectarianism, then they should stay away from football grounds.”