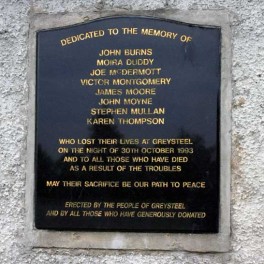 THE communities of Greysteel and Faughanvale will gather tonight for a special service to mark the 20th anniversary of the Rising Sun pub massacre.

UFF gunmen shot seven people dead on October 30, 1993 when they stormed bar and raked them with automatic gunfire.

An eighth victim died six months later from wounds sustained in the attack.

An anniversary Mass will be held in Star of the Sea Catholic Church, Faughanvale, at 7.30 pm followed by an inter-denominational service at the Rising Sun Bar at 9 pm.

Families of those who lost loved ones in the tragedy are expected to lay wreaths afterwards.

The six Catholics and two Protestants, John Burns, Moira Duddy, Joe McDermott, Victor Montgomery, James Moore, John Moyne, Stephen Mullan and Karen Thompson has been enjoying the Halloween festivities when the UFF members launched the attack which they claimed was in revenge for the Shankill Road bombing a week earlier.

A total of 19 other people were injured.

Twenty years after the massacre, notorious killer Torrens Knight has finally apologised for his role in the atrocity.

Knight, who guarded the door of the Rising Sun bar with a shotgun as his two accomplices slaughtered the innocent Halloween revellers, said the attack “should never have happened.”

But his apology was dismissed by SDLP MLA John Dallat who said it was “far too little, far too late.”

Knight, who was 24 at the time, was subsequently given 12 life sentences for his role in the murders and those of four Catholic workmen in Castlerock in March 1993.

He was freed in 2000 under the terms of the Good Friday Agreement.

Nine years later Knight was returned to jail after being found guilty of assaulting two sisters in a bar in Coleraine.

He was released again on August 6, 2010. Now 44, Knight says he deeply regrets his involvement in the Greysteel killings.

He said: “I’m sorry. My thoughts and prayers are with the victims and their families.

“The victims are the ones who have to carry on with life and they are still paying the price.

“That’s how I feel. It shouldn’t have happened, it was a terrible thing. I wish all the atrocities didn’t happen.”

Commenting on Knight’s apology, Mr Dallat said: “If he is truly sorry then he will reveal the names of those involved who have never been brought to justice.

“In every part of the world people have demanded the truth of what happened to their loved ones.

“It has happened a number of times throughout history and the people of Northern Ireland deserve to find out the truth. It doesn’t matter who was involved, the truth deserves to be told.”


One Response to 20TH ANNIVERSARY: GREYSTEEL FAMILIES TO REMEMBER HORROR OF PUB MASSACRE