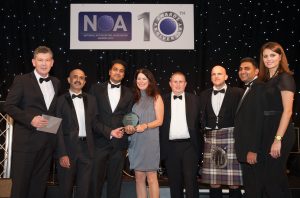 FIRSTSOURCE Solutions, one of Northern Ireland’s largest private sector employers, has reported a revenue growth of 10 % to $134 million in its latest financial results for the quarter ending September 2013.

The recent business growth reaffirms Firstsource’s position as one of the UK’s leading outsource contact centre providers and one of Northern Ireland’s top 20 companies.

Significant business wins have also contributed to bolstering Firstsource’s position within the marketplace.

“The company’s focus on driving value and customer satisfaction is razor sharp and we are seeing results to this effect. I believe that Firstsource is well positioned for growth in the BPM industry.”

Highlights for the Quarter ended September 30, 2013:

Key Company Highlights during the quarter:

* New Appointment: Firstsource appointed Stephanie Wilson as Executive Vice President – Operations for Europe and US. Stephanie will be responsible for Client engagement and Operations for the Customer Management business.

– L.A. Care Health Plan – Added a new logo to the Healthcare Payer clientele list in US.

The company will provide Claims Adjudication support from the US.

– Won an additional contract with an existing client – a leading credit card issuer in the UK. The contract is for CPI (Card Protection) and IPA (Identity Protection) queries and will be managed from the UK center.

– Signed an additional contract with the Largest Pay TV Provider in the UK to provide a range of services such as Broadband support (Voice) and support for Billing & Technical queries for TV, BB & Telephony products (Web Chat). These will be delivered from Northern Ireland and India.

• Revenues at $256 million for the half year ended September 2013, a growth of 8.4% over corresponding period of the previous year.

• Operating EBIT of $22.3 million for the half year ended September 2013, up 67.3% over corresponding period of the previous year.

• Profit after tax $14.5 million for the half year ended September 2013, up 32.2% over corresponding period of the previous year.