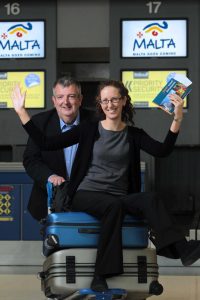 NOW BOARDING MALTA: Travel Solutions Managing Director Peter McMinn and Sales and Marketing Executive Rosemary McLaughlin pack their suitcases to launch the addition of Malta to its ever growing portfolio of holidays and short breaks

The picturesque island of Malta is the latest addition to the company’s ever growing range of holiday and short break destinations with three new flight packages available direct from Belfast International Airport in February next year.

The three-night breaks which start at just £189pps include direct return flights from Belfast International Airport, return airport transfers and accommodation with breakfast at the 4* Cavalieri Hotel or 5* Radisson Blu in St Julians.

Travel Solutions Managing Director Peter McMinn believes that Malta is the perfect spot for a short break or holiday.

“We are delighted to add Malta to our expanding list of holiday destinations for the Northern Ireland holidaymaker,” said Mr McMinn. “It’s a beautiful country, steeped in culture and history and offers tourists the chance to explore fascinating towns such as Valletta which was built by knights in 1566 and the medieval walled town of Mdina, also known as the Silent City.

“Malta’s beautiful scenery and picturesque villages mean that it is widely regarded as a film maker’s paradise and a long list of well know movies have been filmed there, including Gladiator with Russell Crowe, the Da Vinci Code with Tom Hanks, Troy with Brad Pitt and Alexander with Colin Farrell,” he added.

“At Travel Solutions, we are always looking for new and exciting options for local holidaymakers and destinations that offer something a little bit different at an affordable price. Malta fits the bill perfectly,” concluded Peter.

Established in 1996, Travel Solutions is an award-winning specialist tour operator, offering a wide range of air and coach holidays, short and long, to a growing customer base throughout Ireland.

Working with well established, professional transport and accommodation suppliers, the company carries approximately 30,000 holidaymakers annually to an ever growing range of destinations and special events.

For more information on the company’s entire range of air holidays or to make a booking, holidaymakers should call Travel Solutions on 028 9045 5030, click on www.travel-solutions.co.uk or visit their local travel agent.

2. Malta covers just over 122 sq miles, making it one of the world’s smallest and most densely populated countries.

3. Malta gained independence from the United Kingdom in 1964 and became a republic in 1974.

4. Malta has seven UNESCO (United Nations Educational Scientific & Cultural Organisation) World Heritage Sites, most prominently the Megalithic Temples which are some of the oldest free-standing structures in the world.

5. Both Maltese and English are official languages of Malta.

6. Although there is a well-known breed of dog called the Maltese, Malta’s national dog is actually the Pharaoh Hound, with a sleek tan coat and a profile resembling ancient Egyptian statues.

7. Many people with an interest in ancient myths and legends believe Malta to be part of the Lost City of Atlantis.

9. The country has been given the nickname “the land of honey”, partially due to its large production of honey thanks to an endemic species of bee living on the island.

10. Since 1925 when the first film was shot in Malta (Sons of the Sea), Malta has welcomed over 100 feature films entirely or partially.