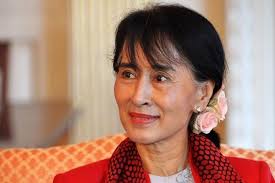 Aung San Suu Kyi is on a visit to Northern Ireland

During her trip, the Nobel Peace Prize winner was met at Stormont Castle.

She was greeted by junior ministers Jonathan Bell of the DUP and Jennifer McCann of Sinn Féin as the First Minister Peter Robinson and deputy first minister Martin McGuinness are in America.

The former political prisoner then went on to Parliament Buildings where she was greeted by assembly speaker Willie Hay.

She said she was in Northern Ireland to learn as much as she could about the developing peace process.

On Wednesday, she met Prime Minister David Cameron, the Prince of Wales and the Duchess of Cornwall.

Secretary of State Theresa Villiers greeted the former prisoner when she arrived in Belfast.

The main event of her day in Belfast will be when Ms San Suu Kyi meets pupils from Wellington College and Aquinas Grammar School for a question and answer session.

She will also take a short tour of Titanic Belfast.

In June 2012 Aung San Suu Kyi made a visit to Dublin where she was welcomed by U2 singer Bono and given the Freedom of the City.

He was assassinated during the transition period in July 1947, just six months before independence, when Ms Suu Kyi was only two.

She was re-elected to parliament in 2012.