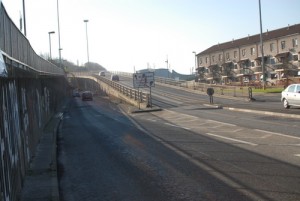 The Leckey flyover closed during a security alert in Derry

A number of homes were evacuated last night after a suspicious object was thrown at a police vehicle.

The incident happened in the Charolette Street area of Derry.

Army bomb squad officers attended the scene for an examination.

The Anne Street Community Centre was opened for those who had to move out of their homes.

Charlotte Street, Barrack Street and the Leckey flyover were closed to traffic while the bomb squad dealt with the object.