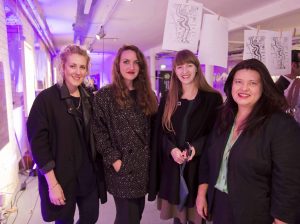 Pictured are Imelda Barnard of Apollo Magazine, Zoe Pilger of the Independent, Jeanette Ward from the Tate and Naomi Waite of NITB.

DOZENS of the world’s top contemporary arts and cultural journalists have arrived in Derry~Londonderry for a Northern Ireland Tourist Board-organised preview of the Turner Prize Exhibition.

The journalists and broadcasters attended a media information event hosted last night by the NITB at the city’s Shirt Factory, and will take in a preview of the Turner Prize today (Tuesday 22 October).

The journalists and broadcasters will also take a walking tour of contemporary art centres in the city, conducted by Graham Farrow of the Culture Company and Brendan McMenamin from Derry City Council.

The exhibition of the work of the four shortlisted artists for the Turner Prize 2013, one of the biggest events in Derry~Londonderry’s year-long UK City of Culture programme, opens at Ebrington Square on Wednesday 23 October.

NITB has contributed £166,500 towards the Turner Prize within a total funding package of £750,000 for Derry~Londonderry’s major UK City of Culture events, and is actively promoting the programme through marketing campaigns and facilitation of local and international media visits.

Alan Clarke, NITB Chief Executive, said: “The Turner Prize presents yet another excellent platform to showcase the UK City of Culture and its wonderful people, arts and cultural scenes to the world, so NITB is delighted to welcome this very high-profile group of journalists to Derry~Londonderry and to Northern Ireland.

“Media visits like this are an important element in our drive to raise awareness and build both Derry’s and Northern Ireland’s reputation on the local, national and international stages. The articles and broadcasts these journalists will deliver to their respective audiences will highlight our offering to millions of potential visitors across the world.”

NITB worked in partnership with Tourism Ireland’s GB and overseas offices to extend an invitation to the visiting journalists. Niall Gibbons, CEO of Tourism Ireland, said: “It is a wonderful coup for Derry~Londonderry to host this year’s Turner Prize. The prestigious exhibition – which has never before travelled outside of England – will help raise the profile of the city, as we near the close of the wonderful, year-long City of Culture celebrations. Tourism Ireland’s busy programme of promotions around the world this year has included a special focus on Derry~Londonderry UK City of Culture – so we are delighted to bring these overseas journalists to Northern Ireland, to enjoy the world’s best contemporary art and to experience the many things to see and do in Londonderry and Northern Ireland for international holidaymakers.”

A glittering Turner Prize Award ceremony, hosted at The Venue at Ebrington, will be broadcast on 2 December by Channel 4.