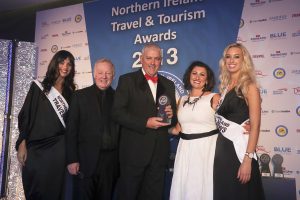 STENA Line has been voted the top ferry company for a record 21st year at the annual Northern Ireland Travel and Tourism Awards.

The ‘Best Ferry Company’ award was presented at a glittering awards ceremony on Friday at the Slieve Donard Resort and Spa in Newcastle.

It was a momentous night for the leading ferry company as Stena Line’s Mervyn McNeely, one of the industry’s most popular and charismatic characters, who retired last month after 40 years in the ferry industry, was inducted into the Travel Industry’s Roll of Honour.

Northern Ireland Travel News has been organising the awards for the past 22 years and this year’s ceremony was hosted by TV personality Les Dennis with more than 450 VIPs from the local travel and tourism industry attending.

Paul Grant, Route Manager for Stena Line – Irish Sea North, said: “This has been a busy year for Stena Line as since acquiring the Belfast-Liverpool route in 2010, we have been working on bringing the ships and service into line with the rest of the Stena Line proposition so it is a real honour to pick up this prestigious award in recognition of this work.

“We successfully completed the two ship refurbishments earlier this year and with improved facilities and additional services we can now offer our customers the same experience travelling the Irish Sea, whether they are going by Superfast from Belfast to Cairnryan or Supercruise from Belfast – Liverpool,” he said.

“The travel industry is used to seeing innovation and high levels of customer service so when they say once again that we are the Best Ferry Company it underscores that the high standards we set ourselves lead the industry,” Paul continued.

“I’m also delighted we have a double reason to celebrate as travel industry stalwart, Stena Line’s Mervyn McNeely was inducted into the Roll of Honour.

“This is a fantastic and very well-deserved achievement for Mervyn who has retired after an incredible 40 years of service to the industry and I want to pass on my personal thanks to Mervyn for his work within Stena Line,” he added.

Stena Line is the market leader on the Irish Sea, offering the biggest fleet and the widest choice of routes from Ireland to Britain, including Belfast to Cairnryan, Belfast to Liverpool, Belfast to Heysham, Dun Laoghaire to Holyhead, Dublin Port to Holyhead and Rosslare to Fishguard. The company carries approximately three million passengers on its Irish Sea routes each year, more than its rival ferry operators combined.