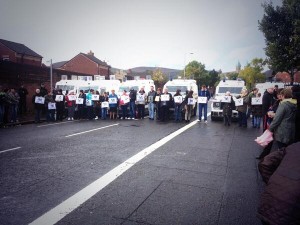 THE only IR terrorist convicted over the Shankill Road bombing has had apology dismissed by a man who lost his wife in the atrocity.

On Sunday, Provo bomber Sean Kelly said he was that nine innocent Protestants were killed when a bomb he had helped transport from Ardoyne to the Shankill Road detonated prematurely in Frizzell’s fish shop.

The convicted was speaking at a plaque commemoration to IRA man Thomas Begley who was also killed after the bomb hidden inside a box exploded on Saturday, October 23, 1993.

The intended target was a UDA/UFF meeting upstairs but unknown to the IRA bomb gang the meeting was switched at the last minute.

However, victims campaigner Alan McBride, whose wife died in the blast, said his apology was hollow.

“He left that bomb on the counter and the timescale for them getting out of that was so small that they had to have known the potential for innocent casualties to be taken that day was huge and that’s exactly what happened.

“So for Sean Kelly to come out now and say he’s sorry, I don’t really believe him.”

“I don’t think any apology will bring back what happened,” he said.

On the commemoration to Begley, he said: “I think there’s better ways of remembering your son than being a child murderer and a murderer of women and pensioners.”

During Sunday’s ceremony, Billy Begley, Thomas Begley’s father unveiled a plaque stating that the bomber “died on active service” and is “always remembered by his many comrades and friends”.

In a brief speech at the ceremony, his father, thanked the crowd and said: “As you well know, this is not a celebration or a glorification of that tragic day that happened. It’s also (not to) degrade the innocent people on the Shankill Road.”

The crowd was also addressed by Sean Kelly, the IRA man who was with Begley on the day and survived the bomb.

He described it “an IRA operation that went tragically wrong”.

“I offer no excuse that will change how any of these innocent people and families will think about myself or Thomas or the IRA as a result of this operation. I am truly sorry for the loss of life and the injuries that were suffered that day and for the suffering the families have endured,” Kelly added.

There were two protests against the commemoration, one involving victims families and another one staged by loyalist youths on the Crumlin Road.

Police also later had to deal with a bomb alert in the area later that afternoon.

Families of some of the Shankill bomb victims condemned the commemoration when the plans emerged earlier this month.

Michelle Williamson, who lost both her parents in the explosion, wrote a personal letter to Begley’s parents, asking them to call off the ceremony.

She told them she had “no problem in acknowledging your loss” but said the unveiling of the plaque to a bomber was “a sick and cruel insult to the memory of our loved ones”.