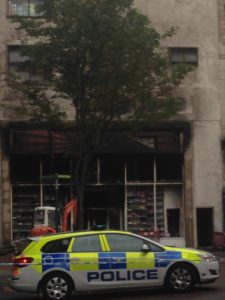 EXCLUSIVE: INVESTIGATORS believe a fire which gutted a Belfast City Centre store was started lights on a Christmas tree.

Belfast Daily understands a spark from the lights set the tree on fire at the B and M store in the early hours of last Friday.

A Fire and Rescue Service source told Belfast Daily: “It would appear there was a fault in the lights which caused a Christmas tree in the shop to go on fire.

“The fire quickly spread throughout the store. Shopkeepers and even householders should remember to switch all Christmas trees off at night.”

The alarm was raised after flames were by a passing police patrol around 5.10 am on Friday morning.

The Northern Ireland Fire and Rescue Service said its crews worked in “challenging conditions” to bring it under control.

“The cordon has now been reviewed and members of the public and business owners can now access the arcade.”