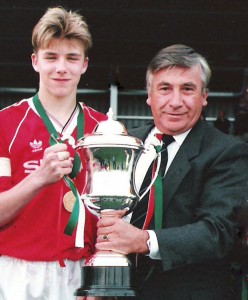 David Beckham with Manchester Utd at the Milk Cup in 1991

THE Milk Cup is looking for a new headline sponsor.

It comes after the Dairy Council ended its 30-year association with the international under-age tournament.

Tournament organisers were told by the Council today that it was ending its sponsorship as a result of a strategic review of its activities in the North.

Dr Mike Johnson, chief executive of the Dairy Council for Northern Ireland, said the decision was “not an easy” one but “no sponsorship is permanent.”

He added: “The Milk Cup has been a hugely important and successful sponsorship for the Dairy Council since we became involved 30 years ago, but the market has evolved, and we need to ensure that our activities meet the needs of the Northern Ireland dairy industry.”

Dr Johnson said the Dairy Council had been delighted over the past three decades to have played a part in making the Milk Cup one of the top events of its kind in the world.

In wishing the tournament every success in the future, Dr Johnston, added: “One of the things that attracted us to the event in the early 1980s was the opportunity it provided for local lads to have the experience of playing against teams from other countries and cultures.

“At a time when Northern Ireland was in the grip of a dark period in its history, and amidst negative publicity in international media, it will always be a testament to the tournament that teams from all over the world were prepared to come to Northern Ireland.”

The tournament, played in the Coleraine-Portstewart-Portush “triangle” area- has launched the careers of numerous international stars, including David Beckham and Ryan Giggs and continues to attract some of the world’s most famous clubs.

It also enjoyed the patronage of former Manchester United manager Alex Ferguson throughout his 26 year reign at Old Trafford.