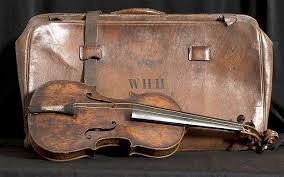 The famous Titanic violin which was sold at auction for £900,000

THE violin that soothed frightened passengers on the doomed Titanic ship was sold for £900,000 in just 10 minutes.

It was played by band leader Wallace Hartley, who died along with 1,517 others as the ship went down.

The auctioneers in Wiltshire set the bidding at £50 for the violin, so “two of his friends could bid” – but after just a couple of minutes it had passed £100,000.

It eventually sold for £900,000 after fierce bidding between two telephone bidders.

Hartley has become part of the ship’s legend after leading his fellow musicians in playing as the vessel sank.

They are famously said to have played the hymn Nearer My God To Thee.

It had taken seven years for the Devizes auction house, Henry Aldridge & Son, to authenticate the instrument.

Several experts were used, including forensic scientists who said the wood still contained salt deposits from the sea water.

Some people still doubt whether the violin is the genuine article, however, and believe it could not have survived being submerged in the sea.

But it is claimed the violin survived in a leather case strapped to Mr Harley’s body who was found wearing his cork and linen lifejacket.

A diary entry by his fiancee, Maria Robinson, said it was saved from the water and returned to her.

Following her death in 1939, the violin was given to her local Salvation Army citadel and was later passed on to the current anonymous owner’s mother in the early 1940s.

The auction house said it had attracted interest from collectors all over the world and added that more than 315,000 people viewed it during a three-month exhibition in the United States.

The most money previously paid for a piece of Titanic memorabilia is thought to have been a plan of the ship used in the 1912 inquiry into the sinking.