THE DAY OF THE JACKAL: FRAMPTON HAS HIS SIGHTS ON WORLD TITLE 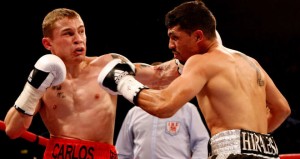 NORTH Belfast boxer Carl Frampton has taken another step closer to a world title after he retained his European super-bantamweight belt at the Odyssey Arena on Saturday night.

The man from Tiger’s Day showed he’s a class act after stopping brave Frenchman Jeremy Parodi in the sixth round.

The win in front of his adoring Belfast fans means Frampton – dubbed ‘The Jackal’ – extended his perfect record as a professional to 17-0.

And the win has now boosted his chances of challenging soon for a world title in the near future.

Roared on by a partisan crowd, the 26-year-old was on the front foot from the off as he immediately looked to dominate the centre of the ring.

Parodi had trouble coping with the champion’s jab in the early rounds and seemed to be staggered in the fourth when he was on the wrong end of a left hand.

However the man from Toulon showed tremendous spirit to stay on his feet and although suffering a cut over his right eye, fought on gamely despite the rounds ticking away.

Yet Frampton found a superb shot to end the bout with in the closing seconds of the sixth, a fierce left thudding into Parodi and sending him falling to his knees before being counted out.

“I feel great. Every super-bantamweight in the world, I am coming for you,” Frampton told Box Nation afterwards.

On the undercard at the Odyssey Arena, Eamonn O’Kane got the nod from the three judges after 10 rounds against Kerry Hope, meaning the Northern Irishman claims the vacant IBF Inter-Continental middleweight title.